With summer in view and the smell of burgers and hot dogs fresh off the grill in the air, it’s time to visit one of my favorite dishes to accompany those delectable savory summer treats: macaroni salad!

Now I have spent literal YEARS on trying to perfect the combo. Whether it be trying more of an Italian dressing style (regular and creamy, I have tried them both) or even cutting the mayo with other tasty ingredients, no two salads have been the same. I have varied up the ingredients with carrots, black olives, celery, various types of peppers and onions, even deli meat. What’s best about a decent macaroni salad is you get to experiment with whatever you have on hand to throw in–it’s hard to go wrong if you stick to the basics!

And last month as I was starting to experiment again with my tried and true summer side dish I finally had an epiphany….and got to work on what I would consider my ultimate macaroni salad. I have found that mayonnaise works best as a base in this, but it always needs a little kick. So while I have cut my mayonnaise with sour cream to provide an even creamier texture, I found that also adding some Dijon mustard is an easy way to punch up the flavor. And to make sure that the Dijon doesn’t overpower the mixture too much, also make sure to add in a pinch or two of sugar. A little bit of sweetness goes a long way and will bring out the savory and cut the bite.

Also super important–make sure to make more of your dressing mixture right before you serve! Pasta loves to soak up all the dressing when you first make it and set it to cool in the fridge, so you will always need to make sure you have more dressing to add right before you serve it. If you add enough that second time, you won’t need to add more later for leftovers. Also, if you’re like me, you’ll be snacking on a bowl of leftovers at some point during the week. And as always, enjoy! 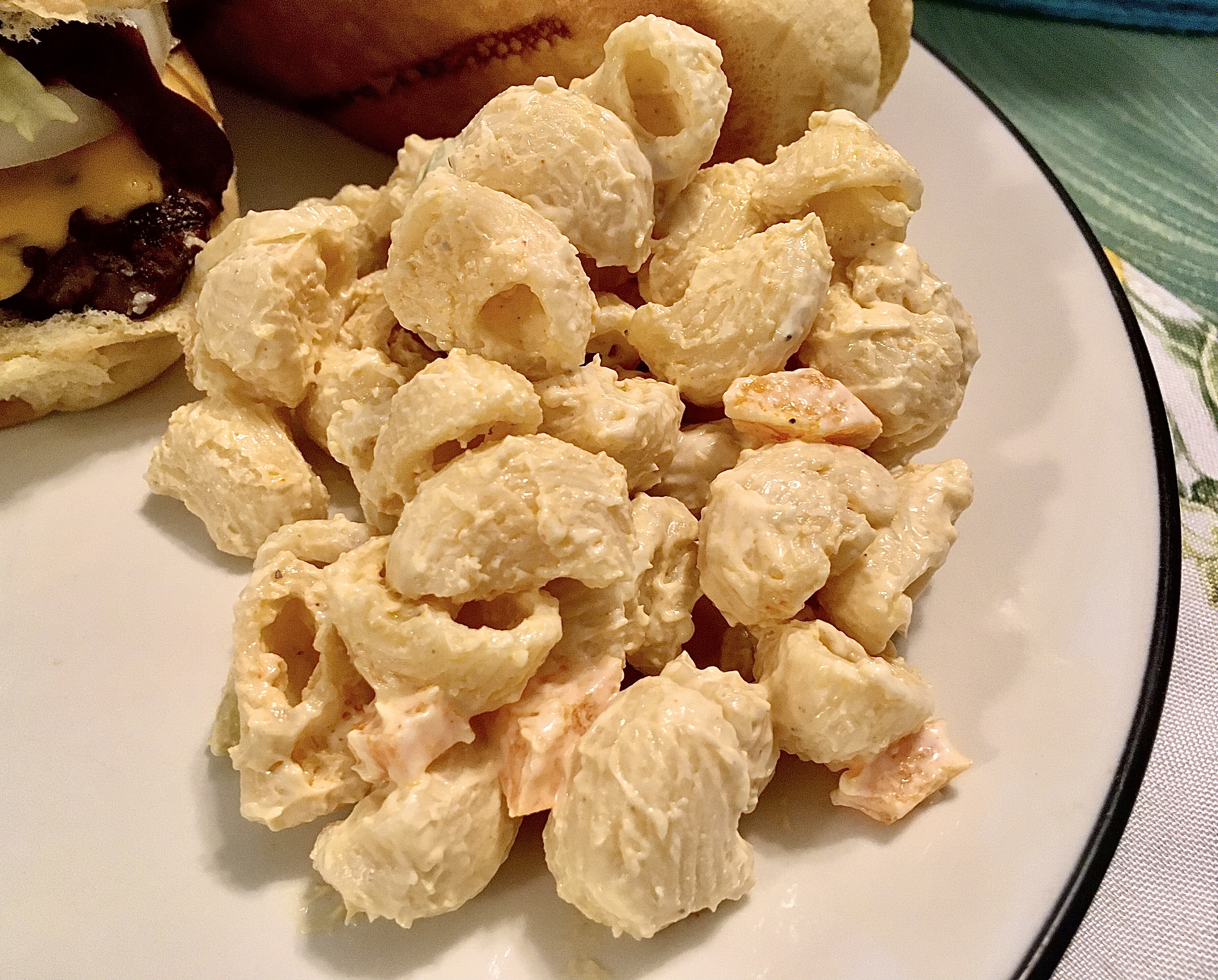 One box macaroni, cooked “al dente” (I prefer elbows, pipette, or medium shells–something that your dressing can really cling to!)

2-3 stalks of celery, cleaned and diced

For the dressing (for initial application):

When I think about making potato salad, it tends to make me break out in a sweat. Because while the finished product looks easy enough, just the notion that the potato needs to be perfectly cooked enough where a fork can go through it, but not crumble….is daunting. But Matt had faith in me this week as he played a double on Monday and left a request for potato salad on my plate. And I was not about to let him down in the slightest.

To make potato salad, red potatoes are truly the best one. They’re durable and you can pretty much leave the skin on them when you cut them into bite-sized pieces. Just make sure each potato is washed thoroughly and that any eyes or bad spots are removed. And especially since we needed to move the last of our red potatoes, it was a win-win.

Place your bite-sized pieces into a pot of cold water on high heat and let it come up to a boil. To check if they’re cooked through, try to locate the largest piece and stick a fork in it. If the fork goes through with ease, then they’re done. And if you’re nervous like me, after you check the potato, turn off the heat and let the potatoes sit in the hot water for a minute or two. Trust me, they’re still cooking when you do this.

Since our fridge was a little more barren of the essentials to make potato salad, I learned to get creative. This is quite typical in our home when making a multi-layered type salad. (Seriously, watch me make a garden salad or macaroni salad and you’ll understand.) I kinda think of it like a “hodge podge” dish, so to speak.

Because instead of yellow onions, I used the remainder of green onions that we had from our last shopping trip. Celery was replaced by fennel stalks. And for a little pop of color, some diced red bell pepper.

The only thing I think it’s missing? Hard-boiled egg. I may need to attempt this version sooner rather than later.

If you’re willing to get over your fears, it’s amazing what you can accomplish in the kitchen. Matt believes I don’t give myself enough credit. And with this potato salad recipe, I’m sort of inclined to believe him.

2 fennel stalks, diced (you want about a cup)

1) Place cubed potatoes in 3-quart pan in cold water. Cover and heat to boiling. Allow potatoes to continue cooking in boiling water until larger pieces of potato are soft enough to let a fork go through. Turn off heat and allow to sit in water another 1-2 minutes before draining thoroughly and placing in large bowl.

3) Add fennel, green onion, and pepper to potato mixture. Add dressing and stir thoroughly to cover. Add sprinkle of paprika and continue mixing. Cover and refrigerate for 4 hours to overnight before serving.

With Memorial Day Weekend down and the beginning of summer season at the Jersey Shore, it’s also the beginning of more grilling, less indoor cooking, and my favorite….salads! Now I adore a good pasta salad, especially something with macaroni and tuna fish involved. Yet sometimes, I also find myself gravitating towards a frozen bag of tortellini and some Italian dressing for a quick and easy side dish!

Alas, there was no tortellini in our freezer upon checking our reserves for dinner tonight….instead just several bags of ravioli that have remained dormant and useful in a pinch during the cold weather. (Honestly, a package of frozen ravioli with a nice thick tomato sauce is a must when it’s freezing outside.) Without tortellini and trying to weigh out the options on hand, I couldn’t help but wonder….why not a cold ravioli salad? Like tortellini, it has cheese in the middle, it’s bite-sized, and the same flavor profiles would work.

Initially, I had attempted trying to locate a cold ravioli salad recipe with little luck. It seems everyone has gravitated towards tortellini instead and with a little bit of research, I located a handful of recipes that seemed way more complicated than it was worth. With a little bit of encouragement from Matt (and a pantry of unlimited resources, it seems), I created this recipe. As most  of you know from prior posts, I tend to draw inspiration from other recipes and vary the original dish to reflect our cooking style. But what does one do when there’s nothing to draw from? You improvise! And this improvisation was one delicious dish. (Matt and I ate over half of that bowl of ravioli with some delicious grilled chicken thighs seasoned in our curry powder–what a tasty way to end Memorial Day weekend, indeed!)

Dishes that are normally prepared hot can be just as delicious served cold. Never be afraid to give them a chance! Maybe next time I’ll throw in some fresh cauliflower, maybe even a nice spinach or grilled yellow squash instead of the broccoli. Or if you’re into the possibility of no vinaigrette and possibly some seasoning or crispy bacon bits, it’s worth a try too. This recipe is one take on a dish that should no longer be overlooked. Tortellini, you’re out and ravioli is in!

1 small jar of marinated artichoke hearts, chopped (and hold onto the liquid from the jar, you’ll need it)

1) Prepare ravioli as directed on the package. Use slotted spoon to remove from water and place into large bowl.

2) Prepare broccoli in the pasta water. Cook until bright green and separated, then strain and add to bowl with ravioli.

3) Combine all ingredients into bowl, including liquid from artichoke hearts. Add enough vinaigrette to lightly toss and coat. Cover and refrigerate for at least 4 hours. Serve.